They Chopped Off His Bowling Fingers! 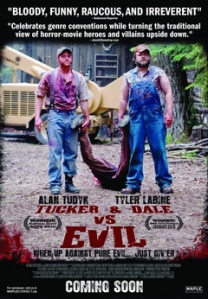 The inspiration for today’s movie came from “fellow” movie reviewer Leonard Maltin on the Doug Loves Movies podcast.  He called today’s movies one of the best of 2011.  Now, I’ve never read one of Leonard Maltin’s reviews, but I’m gonna go ahead and assume that I’m a tougher critic than he is.  And I base that on absolutely nothing.  I kept meaning to get around to watching the movie.  I saw it on Netflix streaming and put it in my Instant Queue, but forgot to come back and watch it.  Then I apparently forgot that it was possible to instant stream the movie, because I saw it at a RedBox and decided to rent it for money I wasn’t already paying.  This movie had better be amazing if it wants to win me over after having cost me nearly two dollars at this point!  Today’s movie is Tucker & Dale vs Evil, written by Eli Craig and Morgan Jurgenson, directed by Eli Craig, and starring Tyler Labine, Alan Tudyk, Katrina Bowden, Jesse Moss, Chelan Simmons, Brandon Jay McLaren, Christie Laing, Travis Nelson, Alex Arsenault, Adam Beauchesne, Joseph Allan Sutherland, and Philip Granger.

A group of college students – Allison (Katrina Bowden), Chad (Jesse Moss), Chloe (Chelan Simmons), Chuck (Travis Nelson), Jason (Brandon Jay McLaren), Naomi (Christie Laing), Todd (Alex Arsenault), Mitch (Adam Beauchesne), and Mike (Joseph Allan Sutherland) – encounter two scary hillbillies named Tucker (Alan Tudyk) and Dale (Tyler Labine) on the way to their camping trip.  The college students are pretty quick to figure out that they’ve just walked in to their very own horror movie.  What they are very slow to assume is what actually turns out to be true: Tucker and Dale are just two nice guys going up to a cottage they purchased to fix it up and do some fishing.  That fact does not come into the picture for the college kids.  One night, while Tucker and Dale are fishing and the college students are skinny-dipping, Allison falls off of a rock and hits her head.  Tucker and Dale save her life, but when they yell to her friends, “We’ve got your friend,” the college students assume that Allison has been abducted by serial killing rednecks.  Misunderstandings get bigger and bigger, leading to actual deaths and the college students trying to lay siege upon two innocent dudes.

Prepare yourselves for a couple paragraphs of me gushing.  This is one of the best movies I’ve ever watched.  It’s extremely funny, and a pretty good horror movie as well.  If you’re looking for complaints, you won’t find them here.  I simply can’t.  Even just the basic idea of this movie is hilarious and ingenious.  I’ve never seen or heard of a movie that flips the cliched horror movies on their heads like this one does.  You think for a little while that you’re going to be relating to these college kids as the heroes of our movie, even though they’re not really that likeable.  Then we see Tucker and Dale, and we make the same judgements that we’ll come to dislike the college kids for by thinking Tucker and Dale look a little scary.  But once we actually meet them, you instantly like Tucker and Dale and the college students mostly become judgmental assholes.  The movie is then a lot of real laughs and extreme violence, mostly tied in with the misunderstandings that happen between the two groups.  The misunderstandings are farfetched, but hilarious.  One such misunderstanding happens when Tucker is using a chainsaw to cut up logs as the college students are approaching the house.  He accidentally saws into a beehive hidden in the log, causing him to run, screaming and wildly swinging the chainsaw over his head Leatherface-style, towards the college kids.  But this didn’t cause the college kids to die, while running away from him in the woods, the college kid runs chest first into a fallen tree, impaling himself.  Later, when other such deaths happen and Tucker and Dale actually see them, they start getting terrified that the kids are part of some suicide cult.  So you’ve got your comedy, you’ve got horror, but there’s also a bit of a nice love story here too.  Allison starts falling for the loveable Dale, but it made me really nervous throughout the entire movie that there was no way these two would end up together.  Whatever the ending was, it leaves you with a warm feeling and a nice message.  But it’s not really that romance or message-heavy, it’s mainly just a hilarious movie.

The performances are either fantastic or they’re just sort of background.  There are only about four people that are important parts of the story and the rest are just walking buckets of fake blood.  And one that has tits.  Well, a couple have tits (like Katrina Bowden, Christie Laing, and Tyler Labine), but only one actually exposes them.  Tyler Labine is essentially the hero of the movie.  He’s a sweet, teddy bear of a hillbilly who’s not that bright, but is really good at trivia.  He’s got a great heart, but low self-esteem.  That part sounds familiar.  But unlike myself, he gets the absolutely gorgeous Katrina Bowden!  Alright, Robert.  Calm down…  Anyways, through the course of the movie he gets to believe in himself more and even gets to be the hero at the end of the movie.  Also, he’s hilarious.  I’ve now seen Labine in three movies and, though Evil Alien Conquerors was not my cup of tea, I thought he was the funniest part in Zack and Miri Make a Porno and, though I can’t say he was the FUNNIEST part of this movie, he was hilarious in it.  The reason I can’t call him the funniest part of this movie is because Alan Tudyk also brought a lot of comedy.  I love Alan Tudyk as well.  He was great in Serenity, he was great in his small role in Knocked Up, and he was great as Steve the Pirate in Dodgeball.  And now he was great in this.  He also plays another likeable guy who’s just trying to get his friend to believe in himself.  The biggest excitement for me was seeing Katrina Bowden in this movie.  I know I’ve claimed to be in love with many actresses in the past, but I am also (and equally) in love with Katrina Bowden.  I don’t know how she’s not gotten more movie roles, but she’s capable of bringing the funny, the emotion, and always (ALWAYS!) brings the gundamned sexy!  Every time she shows up as Cerie in 30 Rock, she captures your attention.  I grant that she did have a bit of an easy job in this movie since her tendency to get accidentally knocked unconscious allowed her to spend most of the movie in bed.  But she was great in all of her conscious parts.  The only other part that was significant to me in the movie was Jesse Moss as Chad.  He made me hate him from the word “go”, but that’s what he was going for, so good for him.  He was basically the leading force behind the attack on these two guys we came to like, and Chad himself never seemed like anything more than a douche in a polo.  You get a bit of understanding for his motivations later, but you still think he’s an asshole.  The other college kids did a fine job, but were not doing much but getting killed.  Except for Chelan Simmons.  She gets them boobs out.

I will endeavor, in the future, to make my reviews of excellent movies better.  I can’t really mock something that is really good.  Tucker and Dale vs Evil is probably one of my favorite movies that came out in 2011 because it’s a great idea supported by lots of funny, a great look, and some fantastic performances.  I’m comfortable suggesting that you just go out and purchase this movie right now, but in the very least you should stream it from Netflix or find it at a RedBox.  After I gave a dollar to my local RedBox for it, I purchased it the very next day on BluRay.  Tucker and Dale vs Evil gets “We’ve had a doozy of a day, Officer” out of “I should have known a guy like me talking to a girl like you would end at someone being dead.”