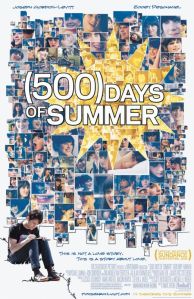 I’m having trouble remembering who suggested today’s movie to me, but I’m fairly confident that it was a lady.  That’s based mainly on the fact that I don’t think most men would want me to watch today’s movie out of anything other than torture.  If I had to guess, I think it was my friend, the Lady MacBalls.  She’s got the required lady parts (I assume) to have suggested this movie, and with her hormones all crazy from the tiny MacBalls growing in her belly, denying her request could’ve meant a very painful death for everyone’s favorite film/video game reviewer.  It was in my best interest to oblige.  But fear of death with not sway my opinion of the movie.  I’ve far too much integrity for that.  So let’s see what I thought of (500) Days of Summer, written by Scott Neustadter and Michael Weber, directed by Marc Webb, and starring Joseph Gordon-Levitt, Zooey Deschanel, Chloe Moretz, Geoffrey Arend, Matthew Gray Gubler, Clark Gregg, Minka Kelly, and Rachel Boston.

Aspiring architect Tom Hansen (Joseph Gordon-Levitt) works for Vance (Clark Gregg) at a greeting card company when Summer Finn (Zooey Deschanel) is hired as Vance’s assistant.  Tom’s friend and co-worker McKenzie (Geoffrey Arend) talks Tom into attending a karaoke party, gets really drunk, and tells Summer that Tom is attracted to her.  Over the course of the remaining 500 days, we watch as Tom and Summer’s relationship goes up and crashes down.

As a guy, I started watching this movie wanting to hate it at least as much as I hate my friend, the Lady MacBalls.  But, by the end of the movie, it had won me over.  It’s not perfect.  Most chick-flicks aren’t because they’re well aware of the fact that putting a sappy romance in a movie is well enough for women.  But this story was charming enough, with some good ideas and an interesting look, and even had some funny parts to it, although I’m pretty sure the joke in the movie about someone having Brad Pitt’s face and Jesus’ abs is a Daniel Tosh joke.  I think the difficulties I had early on in this movie stemmed from its vaguely pretentious art style and the premise of the story.  They threw in little artsy cutaways that I found a little tedious, but I at least appreciated the ones that showed us what day we were watching since the movie cut back and forth between different points in the relationship.  There was a very good use of music to the movie, like when Tom was really happy after his first night with Summer and had a good song to accompany him in his jaunty walk down the street that turned into a brief dance number.  I got a little annoyed by the look of the movie near the end, when Tom was revealed to have a chalkboard on his wall that he used to sketch buildings on.  Come on, movie!  Who has a chalkboard wall … and how the hell do I get one?!

The premise of the movie annoyed me at first because it was so clumsy.  It seemed like it really wanted to be clever by making the girl take the typical guy part of not believing in true love, whereas the guy was the lady in being the overly romantic one.  No one’s ever thought of that before!  I also got annoyed by the silly things that caused people to fall in love in the movie.  Summer says she likes the same band as Tom.  BOOM!  I love you!  Summer falls in love later because someone likes the Dorian Gray book she’s reading.  I grant that a girl like Zooey Deschanel telling me she liked Metallica would pique my interest, but I still acknowledge that it’s a poor basis for my undying love.  Later, when Summer is telling Tom about former boyfriends, she says that she dated a guy she called the Puma because he had a big dick.  Is that a thing?  Why wouldn’t you call him “The Blue Whale” or “The Black Guy”?  This is probably not a good thing to have realized about myself, but I started to like the movie near the end, when I could relate to Tom more as an embittered guy who lost faith in the idea of love.  I’m not saying that this is an accurate description of me, but … uh … y’know what?  Nevermind!  Either way, it was interesting to watch the way he felt about Summer change so completely during and after their relationship through the scenes cutting back and forth in time.  I also completely agreed with Tom when he went off about how cards were a waste of time because they were just putting on paper the things you should be saying.  It also enforced the idea that women are lying jerkfaces, since Summer saying that she didn’t want to be anybody’s girlfriend actually meant that she didn’t want to be Tom’s.  I think the moral of this story will be one that can help me out in the future.  Every time I have to listen to a girl complain because “the one” just broke up with her, I’ll tell her to watch this movie.  At first it seems like it’s crapping on the idea of fate because Tom is so sure that Summer is the one, but then the end brings it back around for a happy ending that should shut them bitches up.  Apparently me TELLING them that a person obviously isn’t the one if you’re not dating them anymore is not good enough.  So go watch this movie, bitch.  It’s pretty good.

I liked all the performances in this movie.  Of course, there also wasn’t anybody in this movie I didn’t already like going in.  I’ve liked Joseph Gordon-Levitt for a long time, and though he was often a mopey bitch in the movie, that was what was called for.  I’m also pretty sure that I’m better with women than he was in this movie, and finding someone I’m better with women than is very hard to do.  For instance, I would never respond to a woman who was asking if I needed office supplies with, “You know what I want.”  Then again, he eventually got her, so I guess I’m the asshole.  Zooey Deschanel spent most of the movie being the kind of girl I wouldn’t like, but she made it more likeable.  I’m beginning to think that Deschanel doesn’t accept a role if she can’t sing in the movie, but I like her nonetheless.  I’m also a fan of Geoffrey Arend.  He tends to be pretty funny in all of his roles, and this one was not different.  Chloe Moretz’ character would typically annoy me, being the smarty pants kid that’s trying to help her brother through a breakup, but with how stupid Tom seemed, it worked.

Despite bordering on the pretentious and having a few things that were too obvious, I found myself charmed by (500) Days of Summer.  I liked the overall message of the movie, I liked the actors in the movie, and I liked the movie overall.  It’s probably a good movie for people to watch after being dumped, and I’ll let you know for sure if it ever happens to me.  I’d recommend this movie even if you haven’t been dumped and would probably say it’s my second favorite chick flick, though that is coming from pretty weak competition.  You can rent this movie from Netflix, but cannot stream it presently.  I give (500) Days of Summer “I think you’re just remembering the good stuff” out of “People don’t realize this, but loneliness is underrated.”