Oh, I’ve Got Some Rage Now… 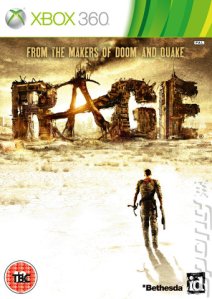 I was very excited to get my hands on this game since the moment I heard about it.  id Software has been one of my favorite developers since Wolfenstein in 1992, though they really stuck with me with Doom.  Quake was also a very good game.  When I heard that they were developing another game, I was already on board.  I saw a lot about it at E3, talking about the fact that all of their environments are hand painted and not just a random texture generator.  When it finally came to the store shelves, I didn’t buy it.  It was a busy holiday season for gaming and funds were tight.  But when it went on sale on Black Friday, the time had come.  This game is Rage, developed by id Software, published by Bethesda Softworks, and includes the voice acting talents of John Goodman, Dee Bradley Baker, Nolan North, Phil Lamarr, Tara Strong, and Claudia Black.

In the year 2029, an asteroid strikes the planet, killing a large amount of people.  The remaining people in the wasteland have huddled together in communities.  Some of them are just regular people, some of them are bandits preying on those regular people, some of them are mutants preying on anything.  There’s also an ominous authority figure called … what was it? … Oh yes, the Authority.  And, of course, there’s a resistance against them with the equally as clever moniker, the Resistance.  We play as a person that emerges from an Ark, buried deep underground and kept in cryostasis for 106 years.  We emerge and are greeted by a member of the Ghost clan (a group of violent bandits that look like Quan Chi from Mortal Kombat), but saved by Dan Hagar (John Goodman).  From this point on, we help people around various towns with their odd jobs to gain reputation in those towns.  Eventually, we join the Resistance and take on the Authority, who is hunting us because Ark Survivor’s apparently have access to something they want.

I was fairly devastated by this game, but the majority of the reason will be in the next paragraph.  This is a pretty classic first person shooter with not much by way of gameplay to separate it from the pack, but id Software arguably created the genre, so it’s all pretty smooth and comfortable.  They don’t add much of anything to the gun types.  They have the standard machine guns, pistol, shotguns, but they do add a boomerang type device called a Wingstick.  You could toss this out, get a decapitation, and have it return to you.  The weapon was nice enough, but it became pretty useless later in the game when it would only knock the enemy’s helmet off and allow them to keep shooting at you.  The enemies varied in type and look a large amount, ranging from bandits dressed like indians, bandits in armor, and the robotic, heavily-armored Authority.  Each one looked pretty different, and also moved different.  The mutants would run along walls and roll, making them difficult to shoot.  Part of the problem with this game is a problem I’ve had with other FPS games in recent history: the headshot.  There was a time when the headshot was all you needed to take out the regular enemies.  This first began to change when Dead Space came out, touting their strategic dismemberment and how a simple headshot would not be all it took to defeat your foes.  But I liked the headshot.  You have to be pretty good to get the headshot and you should be awarded for it.  This game makes the headshot pretty insignificant since most enemies are armored and a headshot would mostly just remove their helmet.  I want headshots to have their power back!  Especially since this game had a crossbow that the game claimed would help you get into locations with stealth, but without being able to one-shot kill your enemy with a headshot, a crossbow shot to the head just gets their attention and they start shooting, throwing stealth out the window.  The look of the game is pretty glorious.  Though you occasionally need to wait a beat or two for them to load up fully, you can see that they took the time to paint these textures.  The environments are ugly, but beautifully executed ugly.  What should you expect of the environments in a post apocalyptic game?  The game is kind of open world, allowing you to leave a town and drive around the wasteland a little, but there are certain paths to take and no real reason to do it unless you’re on a mission, so that turns it more towards linear.  The level maps repeat fairly frequently, but they make you take different paths through them and that keeps them fairly fresh.

::SPOILER ALERT::  It’s not much of a spoiler alert actually.  I won’t spoil the ending of this game because there wasn’t one.  I was playing through the second disc of the game, doing what felt like an average mission that might be closing the third act.  I get to the top of this structure, press a button, fight off mutants, press a button, fight off mutants, and then press the final button and … um … wait a second?  Where’d it go?  They completely forgot to write a ending.  You press that button, a cinematic plays of arks popping out of the ground, and the credits started playing.  For joking purposes, I half thought about stopping my review abruptly right about now, but then I realized how annoying that would be, which is something the people that made Rage didn’t realize.  It felt like it was rushed to completion, but I never saw the demand for this game reaching such a boiling point that they should decide to release it before it was finished, or crap out some really lackluster ending.  So why?  If you had the time, use it to make the game amazing.  Everything else in the game worked very well, but the ending was so disappointing that it tarnished my memories of the rest of the game.  ::END SPOILERS::

There is apparently multiplayer to this game as well, but the ending made me so angry I didn’t even look at it.  From what I can gather, it takes the mildly entertaining vehicle combat used during trips from one location of another in the game and makes you face off with others.  I don’t know, and I don’t care.

It’s not possible to call this game a complete loss.  It’s a gorgeous looking game with some of the tightest shooting mechanics you can find, as well as enemies that give an added degree of challenge with their acrobatic maneuvers.  It’s a completely satisfying game that you will really wish they had finished.  The ending is just so rushed and crappy that it makes me feel like I just wasted my time.  But I didn’t.  I say this game is worth a rental, but know what you’re getting yourself into by the time you reach the game’s end.  Rage gets “…