This is Rumor Control.  Here Are the Facts.

As I come towards the end of my reviews of the Alien series proper, I’ve been trying to remember if my dim recollection of the Alien series matches what I’ve been seeing in the scores on Rotten Tomatoes.  So far they’ve been spot on as they’ve rated Alien as awesome and Aliens as even better.  But when they come into Alien3 and Alien Resurrection, the scores drop below the 50% margin.  I don’t really remember hating the last two movies, though they do pale in comparison to the first two.  So let’s see how my recollection matches up to reality in my review of Alien3, written by David Glier, Walter Hill, and Larry Ferguson, directed by David Fincher, and starring Sigourney Weaver, Charles Dance, Charles S. Dutton, Brian Glover, Ralph Brown, Paul McGann, Danny Webb, Lance Henriksen, Pete Postlethwaite, Niall Buggy, Tom Woodruff Jr., Peter Guinness, and Holt McCallany.

On the Colonial Marine spaceship called the Sulaco, a movie writer unzips his fly and pisses right on everything we loved about Aliens, simultaneously killing Newt, Bishop, and Hicks before the opening credits have even stopped rolling.  The remaining survivor, Ellen Ripley (Sigourney Weaver), crash lands on the prison planet of Fiorina ‘ Fury’ 161, where she’s rescued by the prison’s doctor, Clemens (Charles Dance).  The prisoners – particularly their religious leader Dillon (Charles S. Dutton) and the warden Harold Andrews (Brian Glover) – don’t like Ripley’s presence because it disrupts the calm of the all-male prison community, so the warden contacts the Weyland-Yutani Corporation, that quickly sends a vessel out to retrieve her.  Their calm is further disrupted when the Xenomorph eggs that were hidden aboard the Sulaco hatch, laying it’s egg in an ox and breeding a bull alien that starts wreaking havoc on the prisoners.

The way the title is usually written for this movie, they seem to be implying that this movie is Alien to the power of three, but is it?  Nope!  But is it that bad?  No, not really.  It has its problems, but it’s good enough for what it is.  It’s really got two main things working against it.  First, Alien and Aliens were amazing, making this one that much worse by comparison.  Second, not only was it worse than Aliens, but it destroyed some of what we liked about Aliens in the opening credits.  I’m pretty sure we all got to like Newt, Hicks, and Bishop, but then you killed them all off right away because you wanted to make a new movie and not pay them.  Or they didn’t want to come back.  Or whatever.  Maybe it was just as simple as their whole idea being the all-male prison colony and it not really being super appropriate to have a 10-year-old girl running around.  Whatever it was, it wasn’t really appreciated.  The only thing that could make it worse is if they killed Ripley … oh …  Another thing that could be considered a problem with this movie is the fact that the final third of the movie is just a bunch of people running around corridors, filmed in nauseating handheld cameras.  Other than that, it’s an okay movie.  I did like that the Xenomorph finally started living up to its name by taking on a different form because it had a different host, and the Bull Alien mostly looked pretty cool, but the CG available to them was pretty consistently awful.  The lighting never matched up and the creature stuck out like a sore thumb.  One thing I’ll give the movie credit for is that it has one of the most iconic scenes of the Alien series in it.  I think one of the first images that comes to mind when I think about the Alien series is the image of a bald-headed Ripley with the Xenomorph right next to her head, extending his second mouth, and that happens in this movie. 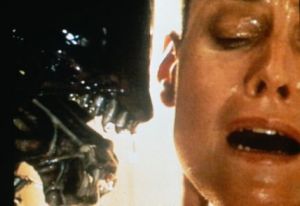 I don’t have a whole lot to say about the performances in this movie.  In some parts, Sigourney Weaver took Ripley to further levels of badassness in this movie, but I thought a couple of moments were just bitchy.  Take, for instance, when she decides she’s just going to walk around with the prisoners.  Sure, that shows that she’s badass because she’s not afraid of them, but the other half of that is her being a bitch.  The prisoners didn’t want her around because of the temptation.  They knew they were bad men and didn’t want to disrupt their harmony, but she’s going around flaunting herself to fuck with them.  Everyone else did their parts very well and are not to blame for the failings of this movie.

Alien 3 might have been a good movie if they just hadn’t named it “Alien”.  It brings down the quality ratio of the series pretty harshly because it just can’t live up to its predecessors.  The story would be more enjoyable if they didn’t choose to kill off pretty much all of our favorite characters, the design of the new Xenomorph was pretty great but lacked the CGI to display it, and the performances were good, but couldn’t really redeem it.  I still would say it’s worth a watch just because it’s a continuation of Ripley’s story, but I doubt it will find too much favor with Alien fans.  Alien3 gets “Don’t be afraid.  I’m part of the family” out of “But we tolerate anybody.  Even the intolerable.”