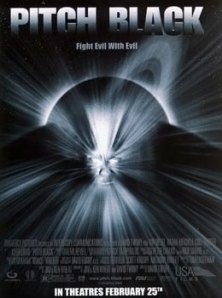 Today’s review request came from a coworker of mine by the name of Fabio.  The movie is a cult hit that is about 50% sci-fi, 50% action.  It’s also the movie that introduced me to Vin Diesel … so I’m not sure how I feel about that.  But we’ll worry about that when someone makes me sit through the Fast and the Furious or the XXX movies.  Today, we talk Riddick, or more specifically, Pitch Black, directed by David Twohy, and starring Radha Mitchell, Vin Diesel, Cole Hauser, Keith David, Rhiana Griffith, Lewis Fitz-Gerald, and Claudia Black (FROM UNCHARTED!  OMG TO THE MAX!).

There is a ship flying somewhere with some people on it when something happens and it crashes.  I am real good make writing!  The captain dies in the accident and so the docking pilot, Carolyn Fry (Radha Mitchell), must take over as acting captain with police officer, William J. Johns (Cole Hauser), as her military adviser.  Besides being stranded on a really sunny planet, the other major concern for all people living is a man named Richard B. Riddick (Vin Diesel) – a murderer Johns is transporting to a prison planet – who has escaped and disappeared.  The people go out looking for civilization and find an abandoned facility with a ship they can get working.  Riddick decides to hero it up (kinda) for the promise of being able to disappear when they leave.  But there turns out to be a problem: nighttime is coming for the first time in 22 years, and with nighttime comes big bad creatures that start picking off the remaining crew.  Riddick becomes more necessary to the remaining crew because of a surgery he’s had to make himself able to see in the dark.  Will Riddick be a hero, or does he have ulterior motivation that will not benefit the crew?

This movie was not well received by critics, but was fairly well liked by the average Joe.  Being halfway in between, I decided I must declare this movie “meh”.  This movie probably should’ve connected with me more than it did, but it wasn’t able.  They story itself was fine enough.  I like a sci-fi movie and this was definitely that.  You’ve got space travel, alien planet, strange creatures, super powers, and plenty of things that easily qualify it as sci-fi.  But it also went for a lot suspense that I just didn’t feel was there.  And when you attempt suspense and fail, you end up with long, drawn out scenes with you waiting for something to finally happen.  The few fight scenes that were there were pretty fast and uneventful.  Riddick hangs down from the ceiling and attempts to choke Johns with his legs, this goes on for a bit, Johns starts hitting Riddick with a baton, Riddick falls down.  Back to square one.  They try to build a lot of tension in the scenes that are in total darkness with the threat of deadly creatures that they can’t see, but when one finally gets somebody, it’s over pretty quickly.  They, admirably, spent a decent amount of time developing some of the characters so that we were interested in them and kind of cared about.  It was mainly just Fry, Johns, Riddick, Jack, and Imam that were developed.  Everyone else just had a timer over their head before they were picked off.  The look was also pretty good for the time and the amount of money they probably got for this movie.  The first half of the movie is so damned bright that you sometimes can’t make out what you’re looking at.  This was nice because it bleached your eyes and made the darkness that much deeper when it shows up.  They used shadow very nicely.  There are scenes when Riddick slowly disappears into the shadow that are nicely executed and a nice scene where one of the crew members is bleeding out in the darkness, lit only by a bottle of alcohol turned into a Molotov lamp, and he spits alcohol onto it, creating a burst of flame and showing he’s surrounded by creatures.  That doesn’t end well for him, but it looked cool for us.

The performances were surprisingly fine.  Radha Mitchell didn’t really surprise me.  I’ve seen her play a character at wit’s end before and she does it here very well.  She tries to keep a strong front but it cracks as more and more pressure is heaped upon her that she was in no way ready for.  Vin Diesel actually put on a solid performance, but there were problems with it.  Part of it was the fact that he always talks in a very raspy whisper and I can barely make out what he’s saying.  I guess that’s supposed to make him appear strong or something.  The writing takes away from the character somewhat.  He is seemingly omnipotent, being able to hear and smell things that aren’t happening anywhere near him, and a lot of his lines are cliche tough guy lines.  But I think Vin Diesel did what he could with the character and at least made him interesting.  Cole Hauser’s character was pretty interesting as well.  He starts off being portrayed as a good guy, but a drug problem, hidden identity, and some less than admirable intentions make us realize that Riddick is the actual anti-hero.  None of the other characters, not even my beloved Claudia Black, made much of an impression on me.  Mainly ’cause most of ’em died.

Pitch Black got me started in a good way by playing a commercial for Escape from Butcher Bay, a very revolutionary and awesome game from back in original X-Box days, but then took me down into meh territory with some bad, or typical, writing and less than inspired fight scenes.  I give it points for it’s solid visuals and decent performances, but it failed to capture my imagination.  I find myself on the fence about it, so I recommend giving the movie a chance.  Not necessary to buy it right off the bat, but it’s worth a rental to formulate your own opinions.  Personally, I give Pitch Black a “They say most of your brain shuts down during cryo-sleep” out of “You think I’m trying to prove something?”