Scratch Any Hero, and You Will Find a Monster Lurking Inside 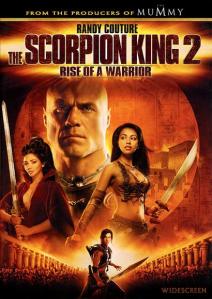 Continuing onward with the Scorpion King trilogy, but starting with the ones that may lead to my untimely death.  Today’s movie is mainly serving to connect the movie that I was happy to watch (The Scorpion King) with the movie I am required to watch because my friend Eric requested it.  I never saw this movie before today because I tended to make good decisions for my entertainment before I started doing reviews.  I knew it existed, I just didn’t want to see it.  Was I right to assume this, or will I be tremendously surprised by the movie?  We shall see as I review The Scorpion King 2: Rise of a Warrior, written by Randall McCormick, directed by Russell Mulcahy, and starring Michael Copon, Randy Couture, Karen Shenaz David, Simon Quarterman, Natalie Becker, Tom Wu, and Andreas Wisniewski.

The Black Scorpions are a group of elite Akkadian warriors lead by Sargon (Randy Couture), a powerful warrior and magician.  After the suspicious death of his father, Mathayus (Michael Copon) joins the Black Scorpions for 6 years of training.  Upon his return, he runs afoul of the newly appointed king of Akkad, Sargon, by refusing to kill his old friend Noah.  Sargon kills Noah anyway, and Mathayus goes to find a weapon powerful enough to defeat Sargon, getting joined by his childhood friend, Layla (Karen Shenaz David).  They also meet up with a Greek poet, Ari (Simon Quarterman), who tells them of a weapon called the Sword of Damocles that can accomplish this task.  They go to Greece and face a Minotaur, which causes other prisoners to join them.  They also save the life of a man named Fung (Tom Wu), who follows them simply to make sure the audience does not go long without being annoyed by something.  In the Underworld, they face the goddess Astarte (Natalie Becker), who tries to kill Mathayus and Layla while Ari and Fung find the sword.  They get it and escape.  Astarte goes to her servant, Sargon, and tells him to kill everyone, including Mathayus.  Our group return to Akkad to find that everyone has been lured into the arena to be killed in elaborate fashion.  Fung and Layla stop them from getting killed while Mathayus and Ari go to fight Sargon.  We think Ari betrays Mathayus, having been paid by Sargon, but then Ari double betrays Sargon and helps Mathayus.  Mathayus kills Sargon, Layla says she’s in love with Mathayus, Mathayus loves battle more and leaves.  The end.

This movie kind of sucked out loud.  Take the story and dialogue of The Scorpion King, make it worse and stupider, and remove all signs of the fun that made The Scorpion King work in spite of the writing, and you have this movie.  It was boring and predictable, the fight scenes were not interesting, and the dialogue ranged from mediocre to awful.  The story just starts in Akkad, makes a really long round trip where apparently Akkad is standing relatively still and nothing interesting is happening for us to check back in on, and then just ends ups back in Akkad.  I was so disinterested with the story that my mind kept focusing on what I saw to be a continuity error about Mathayus having a scorpion tattoo that he didn’t have in The Scorpion King or The Mummy movie.  Thankfully, they did answer this question by having him burn it off with a sword that was hot for no reason, so I didn’t have to wonder anymore.  The decision to make Ari betray Mathayus was completely ill-conceived because it happens and then turns him back into a good guy all within the span of about three minutes.  Had we been given an idea that he was a bad guy from the time we met him, we would be more happy to see him turn good at the end.  The poor state of the dialogue is in matching to the story, being a few failed attempts at witty one-liners or just exposition.  The narrator goes on far too long into the movie.  You’re only necessary to give us backstory, we don’t need you to tell us what we’re watching.  And as for the “witty one-liners”, there’s one part where Astarte tells Layla that she’ll rip her face off and Layla says “Good, then I won’t have to look at you.”  Good comeback.  Though to a lesser degree, The Scorpion King suffered some of the same problems, but the fun of the movie and the cool fight scenes elevated it.  This movie decides instead to have uninteresting fights, spread far between, and amp that shit up by using slow-mo to accentuate moves that aren’t that impressive.

As bad as those things are in this movie, the graphics of this movie are much worse.  Not always, the sets are all pretty well done.  The Underworld actually achieved a slim level of creepiness with it’s set pieces, and they all seemed to have been crafted very well.  The Rube Goldberg machine that they set to kill all of the Akkadians was pretty interesting, but only assuming you ignore the fact that it was an over complicated way of killing a group of people that were trapped in an arena surrounded by archers.  It still looked good, though.  Everything else was the problem.  If you make it long enough into this movie to see it, the pinnacle of it’s awfulness is the Minotaur.  It was the worst piece of computer animation I can recall seeing recently.  They seemed at least partially aware of it and tried to mask it with shaky camera, or not use it at all and use a prop head next to the camera, but when I saw that animation again I was just bummed out by how bad it looked.  They must’ve figured out that their computer animators only did this as a hobby, because the scorpion Mathayus fights at the end of the movie is mostly invisible.  Problematically, they then decided that they should just have pots fall over a lot to show that it was still there.  But they end it by having Mathayus throw some oil on it so that he can see it again, and then I was bummed out again.  Also, to show that he’s been imbued with Astarte’s power, a drop of her blood lands on Randy Couture’s head and makes a Scorpion, but it actually just looks more like a bad, tattoo comb-over.  But the thing that still gets me is the thing you can see to the right of this paragraph, and that’s the Sword of Damocles.  Would you look at that thing?!  It’s so nondescript that it seems like a placeholder for the real weapon that they’ll make later.  I could make that thing with some cardboard and spray paint!  Shouldn’t mythical weapons have some cool designs on them and not just be a boring hunk of metal with a shiny, sharp thing coming out of one end?  Looking at it’s making me mad.  I’m switching paragraphs.

The acting was generally pretty bad.  Michael Copon had a good look to him, and performed at least adequately, but it’s a stretch of credulity to try to have me believe this skinny guy is going to one day be The Rock.  Also, he lacked the Rock’s charm and presence, so that’s another negative.  Surprisingly, Randy Couture isn’t a good actor.  It’s not really his fault; the casting people shouldn’t have put him in such a big part of a movie anyway.  He did fine in the background of the Expendables, but he needs a little more practice before headlining.  He did really good in the fight scenes, though.  That’s not really a shocker, I suppose.  Karen David was ignorable for her performance, but she was at least pretty good looking.  Her character, however, was the most irritating thing in this movie for me.  I started thinking about it in the first fight she has with Astarte.  Almost every word out of her mouth up to that point is about how she can fight as good as any man.  She then gets into an unimpressive girl fight with Astarte, lord of the Underworld, which starts with “You’re ugly and old!”, “Well you can’t seduce guys!”, and “Well your weave is false!”  Okay, I added that last one.  Inevitably, she loses and must be rescued by Mathayus.  If you weren’t yet convinced that the writers don’t think much of women, by the end of the movie she seems to have not taken to killing and has decided she would rather be Mathayus’ housewife, but he wants to adventure on.  I guess the writers really put her in her place … which is barefoot and pregnant in front of the stove, if the writers had their way.  As for Natalie Becker, she wasn’t a good female character either.  I’ve seen movies where good looking chicks can be intimidating villainesses, but I didn’t see one today.  She was mainly just hamming it up, but was pretty weak and ineffectual in combat.  She was losing to a housewife until she decided to use magic.  SHE’S SUPPOSED TO BE A GODDESS!!

This movie sucks.  Don’t watch it.  Unfortunately for me, I’m moving on to part 3, and this movie has made me pretty nervous about it.  Weak story, lame dialogue, mediocre performances, and atrocious graphics.  But the sets were nice.  And the ladies were pretty.  I guess that’s all I can say about that.  You COULD stream this right now off of Netflix, but why would you?  The Scorpion King 2: Rise of a Warrior gets “Please tear my face off so I won’t have to look at you” out of “I fight for what you’ve corrupted.”