I Can STILL See Your Dirty Pillows 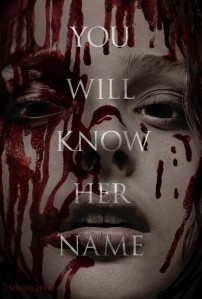 I love my Film Criticism class.  At first I was a little bit resentful that I showed up for class to find that we were watching the 1976 Carrie movie.  I had already seen and reviewed this movie!  And more than that, I didn’t really like it that much.  But after the movie, I found out some very exciting news: our midterm was to watch the new remake of the movie and compare the two.  I had already considered seeing this movie out of potential morbid curiosity.  But even better than that, I’d have to assume I’ll just be able to pull my midterm right out of this review.  But you guys will get the Director’s Cut of my midterm about the movie Carrie, based on the novel by Stephen King, written by Lawrence D. Cohen and Roberto Aguirre-Sacasa, directed by Kimberly Peirce, and starring Chloë Grace Moretz, Julianne Moore, Judy Greer, Portia Doubleday, Gabriella Wilde, Ansel Elgort, Alex Russell, and Barry Shabaka Henley.

Carrie White (Chloë Grace Moretz) is a shy weirdo that gets abused by her schoolmates for not understanding what’s happening when she gets her first period in the shower.  To top that off, her mother (Julianne Moore) abuses her because she thinks Jesus gave her a period as punishments for her sins or some such nonsense.  But Carrie starts to realize that she’s not just an ordinary creepy girl.  She starts to realize that she can do things with her mind; a phenomenon she finds is called “telekinesis.”  But, more important than that (if you’re a high school girl), is that Tommy Ross (Ansel Elgort) asked her to the prom!  Sure, he asked her at the behest of his girlfriend, Sue Snell (Gabriella Wilde), because they felt sorry for Carrie.  But Carrie still has a problem: Chris Hargensen (Portia Doubleday).  Chris is the head of the bully girls that pick on Carrie, and she resents Carrie because picking on her got her punished and banned from the prom.  And that’s just good logic right there.  Chris devises a plan with her boyfriend Billy (Alex Russell) to make Carrie pay for the punishment that she brought on herself.

I should do remakes more often!  I just got to copy and paste that whole thing from my other review!  Now, my midterm essay is supposed to be more about the differences between the two movies, so this won’t be my typical review.  But I’ll still get the review in there somewhere.  Let’s start with the story.  The story was almost exactly the same.  This movie claims that it stuck closer to the original novel than the original movie, and that just makes me think I wouldn’t like the novel.  I don’t particularly care about either story.  But the differences that I noticed actually made me like the story a little bit more.  The fact that Carrie’s mom had a job didn’t make that much sense to me.  It seems like it’d be hard to keep a job with that level of crazy going on.  I thought the ending of the original movie was much more effective, but this one was apparently more like the novel (at least according to Wikipedia).  The scene afterwards worked much better as well.  First of all, the sequence happened in a dream, so Carrie might not actually have decided to come back from the dead.  But if she did, it just makes much more sense that she could maybe have survived bringing the house down on her head instead of bringing the house down on her head, being dug out, prepared for burial, buried, and then coming back to life as it seemed the remake was implying by having Carrie’s gravestone start cracking.

The look of the movie would obviously have improved over time just because of advances in technology (not to mention the extra $28.2 million the remake had to work with).  Most everything in the movie just looked a lot better.  I like that they kept the fact that Carrie starts and ends the movie covered in blood, but they did it differently.  The original started with the shower scene which this movie still had, but this one started with Carrie being born.  I guess that makes it more symbolic that not only the movie but Carrie’s life started and ended covered in blood.  I thought the prom scene in this movie was much better too, even before it gets to the “bloody prom” part.  They still have the scene where Carrie and Tommy dance in this movie, but thankfully Peirce didn’t make the strange choice to film the two of them dancing in a centrifuge as De Palma did.  But I liked it much better when it got into the “bloody prom” part.  It was much more brutal as I imagine it should have been in the original.  The original movie had Carrie attacking people with a fire hose.  In the remake, Carrie crushes people with bleachers, throws heavy decorations at people, electrocutes them, and lights them on fire.  The ensuing car crash was also done much better.  It made more sense that they would have tried to run Carrie down because she kept them from leaving town.  In the original, they just kind of show up and the movie doesn’t really bother trying to tell us their motivation for running her down.  Then it was also graphically better when she slams the car to a stop.  I did think it didn’t make sense because the speedometer made it seem that they had gotten up to about 100 mph trying to run her down but they didn’t fly through the windshield until Carrie slammed the car into the gas pump.  I think going from 100 mph to 0 so instantly would have sent them both out of the car.

One thing that came up in class was the fact that De Palma filmed some of the scenes in a very perverted fashion that really didn’t seem to fit the movie.  Things like the shower scene and the detention exercises seemed more like they were out of Porky’s than out of a horror movie.  There was a little bit of that in this movie, but I only noticed it in the beginning when they were playing volleyball in the pool and they were filming all of the “high school students” underwater and below the belt.  I guess it helps that this movie was directed by a woman instead of a man.

There were a lot of differences in the performances in this movie.  Chloë Moretz did a decent enough job, but I didn’t feel she could really touch the quality of work Sissy Spacek put out in the original.  Spacek’s Carrie was afraid of her powers for most of the movie.  Moretz relished them almost immediately.  I thought it was a bit of a stretch for this movie to want me to believe that this girl would lose her mind when she got her first period but think it was cool that she has telekinesis.  She apparently has pyrokinesis as well because she can weld locks with her mind, and she also has some amazing baby gender-detecting ability.  I guess she did get a lot more practice with her powers in this movie than Spacek did, which I also thought was weird.  Seeing her practice with her powers made this feel more like I was watching a prequel to X-Men.  The strength of her powers also varied as needed by the movie.  At one point she’s lifting a car, but minutes later she can’t push her mom off of her?  On the other hand, I thought Julianne Moore did a much better job than Piper Laurie.  Moore played it a lot more real and Laurie played it almost cartoonishly over the top.  It makes sense since after I read that Laurie thought the movie was a satire of horror movies after she read the script, but the character works much better if she doesn’t cause the audience to laugh at some of the things she does.  It made me think that my dream team would’ve been Spacek as Carrie and Moore as the mom, if that would’ve been age appropriate.  Maybe with some clever editing…

I also thought they made some strange changes in the other girls of Carrie’s school.  I thought the role reversal was weird between Sue and Chris.  The Chris of the original (Nancy Allen) was a hot blond, and Sue (Amy Irving) was the cute brunette.  In the remake, Sue was the tall, hot blond (Gabriella Wilde) and Chris was the cute brunette (Portia Doubleday).  I guess anyone can be a bully, but typically the tall, gorgeous blond is the mean one, having been spoiled by being able to get her way her whole life with her looks.  I also thought that the bullies weren’t as cartoonishly mean to Carrie as they were in the original.  When Carrie sucks at volleyball, Chris makes a joke about it but is generally encouraging.  Carrie didn’t get hit in the face with a baseball cap because of it.  And when Carrie was freaking out in the showers, the girls thought it was strange that she didn’t know what a period was, but they seemed to be genuinely offering her tampons until she kept freaking out about it.  Chris did start to become much more unlikeable when she filmed it and put it on the internet, and even more unlikeable when she didn’t delete the video from her phone before going into the principal’s office.  No one likes a stupid person.   I also thought it was interesting that the roles were reversed between Chris and her boyfriend Billy, who I thought was The Situation for a good part of the movie.  Chris was the manipulator in the original movie, and Billy was in this one.

The Carrie remake was scarcely different from the original.  In some ways it was improved, such as in the look and in the greater majority of the performances.  The only performance I liked in the original movie was Sissy Spacek, and the only performance that was not improved on for the remake was the very same role.  The story was basically the same.  If you were forced to make a choice between the two of them, I guess I would recommend this one, while still saying that Spacek is worth checking out in the first movie.  But if you don’t need to choose, then I’d say you can get by skipping both of them.  Carrie gets “You know the devil never dies, keeps coming back.  But you gotta keep killing him” out of “There are other people out there like me who can do what I can do.”