Laugh While You Can, Monkey Boy! 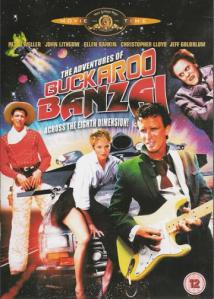 I’ve heard about today’s movie many times as a staple in nerd culture. It got to the point where I felt as if I would not qualify as a true nerd if I had never seen this movie. And since I have only two things – my nerdiness and my balls, and I don’t break ’em for nobody – I felt it was necessary to watch The Adventures of Buckaroo Banzai Across the 8th Dimension, written by Earl Mac Rauch, directed by W. D. Richter, and starring Peter Weller, John Lithgow, Ellen Barkin, Christopher Lloyd, Robert Ito, Clancy Brown, Lewis Smith, Jeff Goldblum, Pepe Serna, Ronald Lacey, Matt Clark, Vincent Schiavelli, Rosalind Cash, Dan Hedaya, and Yakov Smirnoff.

Buckaroo Banzai (Peter Weller) is some kind of scientist/action hero guy. The movie opens with him testing out a Jet Car with a oscillation overthruster mounted to it that allows it to drive into a mountain. When he comes out, he finds some kind of alien organism attached to the car. Elsewhere, in the Trenton Home for the Criminally Insane, Dr. Emilio Lizardo (John Lithgow) hears about Banzai’s accomplishment and has a flashback to when he helped Banzai’s mentor, Dr. Hikita (Robert Ito), in a overthruster experiment that failed and allowed Lizardo to have his mind taken over by Lord John Whorfin, leader of the Red Lectroids. The Red Lectroids are a group of alien reptiles that tried to take over Planet 10 before being stopped by the Black Lectroids and getting banished into the 8th Dimension. The Red Lectroids now spend their time hidden as regular people who all share the same first name of John. Banzai finds a girl named Penny Priddy (Ellen Barkin), the long-lost twin sister of Banzai’s deceased wife, but she is kidnapped to ransom her for the overthruster, and the Black Lectoids threaten to destroy Earth if Banzai can’t stop the Red Lectoids. Can Buckaroo Banzai save the day? And if he can, will we understand what the hell is happening in this movie?

Generally speaking, a cult hit is not a very good movie, but has a certain campy charm that makes it appealing to a certain group of people. I guess you could say that this movie has a bit of a campy charm to it, but it just wasn’t very good. You could very easily say this movie is imaginative, but it was also very strange and confusing. I barely have any idea what was happening in this movie. The whole theme of the movie was reminiscent of old serialized action/drama’s that I’ve seen on Mystery Science Theater 3000, but I wouldn’t want to watch those without three hilarious guys mocking it. This movie was not painfully bad, and certainly had a few entertaining moments, but it was so confusing to me that I can’t say I enjoyed watching it. There was a machine that put people into another dimension, this group of scientist/superheroes that were also in a band or some shit, a love interest that was inexplicably depressed when we meet her and was the twin sister of our hero’s dead wife but them dating was cool somehow, a bunch of strange-looking aliens that all were named John for some reason. I have no idea what was going on here. I suppose it’s a similar story to the first Men in Black movie where the heroes have to stop something from happening to save the world, but it was like the first Men in Black if it was written by people on LSD that didn’t read the story they wrote after the drugs wore off.

The coolest thing about this movie is the people in it. It may not have been the start of these actor’s work, but it was certainly one of the earliest roles for people that went on to be in huge movies. Peter Weller may not have had as big of a career as some of the other people I’ll get to, but he was Robocop. His performance in this movie was decent, but nothing that caused me to pay much attention to him. John Lithgow, on the other hand, I did pay attention to. We should all know Mr. Lithgow from his many other fantastic performances and he was probably the most enjoyable part of this movie with his over the top performance as Emilio Lizardo. If not him by himself, some of the funniest parts were interactions between him and his resentful underling, John Bigboote (which most people pronounced Big Booty), played by Christopher Lloyd. This man will be forever loved by me for Back to the Future, and his role as Fester Addams helps too. This movie didn’t do anything to help my love of him, but didn’t do enough to hurt it. I don’t really know what I thought about Ellen Barkin’s performance because I mainly spent all the time she was on screen trying to figure out if I was attracted to her or not. I’m still undecided. There are many other people in this movie who went on to huge movie roles that I’m sure had very little to do with this movie. Jeff Goldblum was in Independance Day and Jurassic Park, Ronald Lacey was most famously Toht in Raiders of the Lost Ark (though that was before this movie), Clancy Brown was the fuckin Kurgan in Highlander, Dan Hedaya was in Alien: Resurrection, and Yakov Smirnoff was … Yakov Smirnoff. Lots of big names in this movie, if nothing else.

I can see how people would find this movie charming without actually finding it charming myself. Kudos are deserved for making a movie that certainly qualifies as a candidate for the most imaginative movie I can think of, but the movie also has to make some sense for me to get into it. It was sort of fun, and included varying qualities of performances from numerous recognizable characters, but if you never know what’s going on, what’s the point? I can’t really recommend you watch this movie. I imagine I’ll find it fun to be able to say that I’ve seen this movie in the future, and it is apparently such a staple in nerd culture that you may have to watch it to consider yourself nerdy, but the movie itself is only good to be mocked, as far as I’m concerned. If they tried to be funny by kind of being a parody in itself, I didn’t get it. The Adventures of Buckaroo Banzai Across the 8th Dimension gets “Use more honey. Find out what she knows” out of “I’ve been ionized, but I’m okay now.”