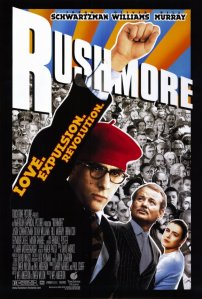 That guy Eric sure does love his pretentious comedies.  Today’s movie was not only requested, but supplied by friend and coworker Eric.  It’s a movie that I feel like I’ve seen before, but remember nothing about whatsoever.  I did find out that I rated it on Rotten Tomatoes as “Not Interested”.  I feel like that statement still holds true.  I’ve just never been into this director or his movies because they seemed to me like artsy fartsy crap that I wouldn’t find funny.  Let’s find out if I was right in my review of Rushmore, written by Wes Anderson and Owen Wilson, directed by Wes Anderson, and starring Jason Schwartzman, Bill Murray, Olivia Williams, Mason Gamble, Brian Cox, Sara Tanaka, Stephen McCole, Seymour Cassel, and Luke Wilson.

Max Fischer (Jason Schwartzman) is a 15-year-old student of Rushmore Academy who excels in extracurricular activities, but fails in grades.  Because of this, he runs afoul of the headmaster, Dr. Guggenheim (Brian Cox), and is threatened with suspension.  Max befriends the father of two other students, Herman Blume (Bill Murray), and falls in a one-sided love with Rosemary Cross (Olivia Williams), a widowed first grade teacher.  Max gets expelled for trying to open an aquarium on a baseball field and is forced to go to a public school, where he doesn’t really fit in.  Herman starts dating Ms. Cross behind Max’s back as Max still tries to advance his unrequited love with her.  This eventually ruins Blume’s marriage and his friendship with Max, and the two start a prank war that escalates drastically.  Then some more bullshit happens and the movie ends.

I wouldn’t go so far as to say this is a bad movie, but I will say that I didn’t care for it.  It’s every bit the artsy fartsy movie that I expected it to be, it doesn’t have much of a cohesive story, and it just wasn’t funny to me.  I don’t think I’ve ever really liked a Wes Anderson movie, and I’ve seen a couple.  I understand a lot of people are really into them, but I’ve never really seen the appeal.  There wasn’t much of a story to this movie, first of all.  It was basically just about a kid that got expelled, but this situation was never really resolved.  He was no less expelled by the end of the movie.  He also fell in love with Olivia Williams, and this never turned into anything.  The same would go for Bill Murray being in love with her.  Max has a revelation at the end and becomes a little less of a douche, and even gets Blume and Cross to talk again, but it’s not resolved.  The movie starts a bunch of side stories and forgets what it was talking about.  It’s like having a conversation with my mom.  Abstract story would be fine if the movie ever made me laugh, but it didn’t.  The only thing that even made me smirk was Bill Murray, and pretty much only in the part where he was drunk and downtrodden in the hospital later in the movie.  But that’s just not enough for me.  By the end of the movie, I didn’t feel like I hated what I had just watched, I just felt like I had no opinion and had just kind of wasted my time.

The performances were mostly excellent in the movie, elevating the movie out of the total “meh” category.  Jason Schwartzman is pretty good at playing a total annoying douche, and he does so in pretty much every movie I’ve ever seen him in.  I found him annoying and irritating, but that’s probably not a negative against him because I feel like that’s what he was going for.  This was at it’s best and almost funniest when he was being a total asshole to Luke Wilson because he felt threatened by him and hurt because Olivia Williams seemed to be dating him.  Bill Murray was a much more subdued Murray than you see in many of his movies that I enjoy, but I still liked him in the movie.  I prefer when he does things that are funny, but I really just want to see him.  Olivia Williams was pretty great in the movie.  Most of the time she was just being good-looking and real, but she had a great scene where she was telling Max about her dead husband that was really emotional and really well acted, but it’s not surprising from her because she’s pretty much excellent in everything I’ve seen.  Brian Cox had a couple of kinda funny moments too.  I liked when Max brought him temporarily out of a coma because he hated Max so much.

I really feel completely uninspired by this movie, and thus the extra short review.  I didn’t hate the movie; it had a couple of cute parts, a couple of great performances, but no real story to speak of and it just came off as a little pretentious and unfunny to me.  On the other hand, I’ve heard of a lot of people liking it and Wes Anderson’s other movies, so I don’t know if I can even say I don’t recommend you see it.  And I’m sure all of those people would say something like “You just don’t get it, man!” and write me off as too uncultured to understand the appeal of a not funny comedy where nothing really happens.  But, for the rest of you … I don’t know … check it out?  … maybe?  Rushmore gets “Yeah, I was in the shit” out of “Are you fond of that mustache?”