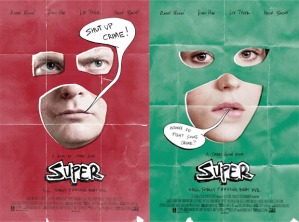 Podcasts had lead me to this movie that I may have only seen on my own because of one of the female stars and my infatuation with her. It didn’t seem like a movie that interested me even though I’m so big into superheros, but the podcasts that I heard it on talked me into it. So, let’s get into my review of the movie Super, written and directed by James Gunn, and starring Rainn Wilson, Liv Tyler, Kevin Bacon, the love of my life Ellen Page, Michael Rooker, Nathan Fillion, and Linda Cardellini.

Frank D’Arbo (Rainn Wilson) has not had a fantastic life. One of the few perfect moments in his life is when he married his lovely wife Sarah (Liv Tyler). That doesn’t really last long. See, Sarah is a recovering alcoholic and addict, and she eventually leaves Frank for Jacques (Kevin Bacon), her drug pusher. Depressed, Frank has a vision where he’s touched by the finger of God himself after watching a show starring the Holy Avenger (Nathan Fillion), a public-access religious superhero. He goes to his local comic book store for research on superheroes, where he meets Libby (Ellen Page). He creates a costume and becomes “The Crimson Bolt”, armed mainly with a big wrench that he uses to savagely beat people that break the law. Eventually he gets shot in the leg and has no choice but to go to Libby for help. She decides to become his sidekick, Boltie … and later rapes him. Then they must up their arsenal to take down Jacques and win back Sarah.

I dug all up into this movie. Not only is it a movie about a real life dude becoming a superhero (something that I’ve always wanted to do but was stopped by my laziness and aversion to pain, and also something I’ve written a short story about before), but it had a great comedy side, a great action side, and a great drama side to it. I was pleasantly surprised by how much I liked this movie. Rainn Wilson’s depression over the loss of his wife was both sad and often humorous. It had great realistic action and some pretty awesome violent effects. From what little I knew about James Gunn’s previous movies, I figured he’d have more of a Troma movie vibe to him, where the violence is the reason for the movie and the story is secondary or worse, but this movie had a great story and the violence was only there to support the story. Most of the reviews I read for this movie completely disagree with me, but I find that happens fairly often with movies and that’s probably the inspiration for this entire review site. And it ties it all up with a nice touching message. I digs it.

The performances were even better than the story. I only knew Rainn Wilson for his comedy ability from the Office, where he was fantastic, but he’s got some acting chops that I was happy to see here. And I know he’s got acting chops because, at one point, he gets raped by Ellen Page and has to act like that’s not awesome. I couldn’t act like that. After a terrible loss suffered by his character near the end of the movie, he becomes a bona fide bad ass and wreaks all kind of Hell all over crime’s face, getting pretty damned un-Batman while he’s at it. I’ve never seen Liv Tyler act like a druggie before, and this was a great departure for her as well. I would posit she perhaps learned something from her dad on this, but that is just being rude of me. Kevin Bacon was awesome as well. He was the major antagonist of this movie; being the drug pusher that took Rainn’s wife and other such dick movies, but he was still really charming and somehow likeable. Ellen Page is the love of my life. …I guess I should say more. Her character called for her to be a female me. And she managed to do that without actually meeting me, which is how she’s still unmarried. She had a childlike innocence that has been sucked out of me long ago, and she would go completely manic when it was time to fight crime because she had idolized superheros for so long. That might could be me. And the girl friggin’ rapes a guy! I’ve only seen Demi Moore do that! Also, she “snikt’s” a guy! I want to be able to “Snikt!” It was nice to see Michael Rooker again, since I haven’t seen the guy since Mallrats, but his part is pretty small. I loves me some Nathon Fillion as well, and though his part in this movie is relatively small, it’s pivotal and pretty damn funny to boot.

Other critics can suck it. I dug this movie. I got it from Netflix and I recommend you do the same. Sadly it’s not available for streaming, but get it in the mail. Otherwise you can probably find it at RedBox by now. Give it a watch, says I. Me? I’m buyin’ this shit. I give this movie “That’s what happens in between the panels” out of “It’s all gooshy”.