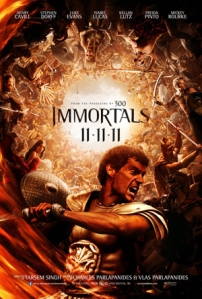 I don’t know if I’ve ever taken a review request for a movie that’s still in theaters before, but then again, with over 100 reviews at this point, it’s a miracle I haven’t reviewed the same movie more than once. One should not expect much from my memory. Either way, I was happy to take this request (even though it cost me money) because one of my favorite passions or interests in life is Greek mythology. Not Roman though. Fuck those guys. But I will happily watch any movie about Greek mythology, or even just that time period. This has taken me down good roads (Troy) and bad roads (Clash of the Titans remake), but I will not waver from my beliefs. So let’s see how this Greek mythology movie holds up in my review of Immortals, directed by Tarsem Singh, and starring Henry Cavill, Mickey Rourke, Freida Pinto, Stephen Dorff, John Hurt, Luke Evans, Isabel Lucas, and Kellan Lutz.

Loosely based on the story of Theseus and the Titanomachy, we jump into this story as the Heraklion King of Crete and Awesome Names, Hyperion (Mickey Rourke), is searching for the Epirus Bow – a powerful bow with infinite ammo and Rambo-esque explosive capabilities – because it can help him free the Titans and destroy the Gods. He’s mainly doing this ’cause they ignored his prayers to save his family from illness, so fuck those guys. In order to find the bow, he goes to a monastery and takes 4 priestesses, one of which is an oracle named Phaedra (Freida Pinto), but they won’t reveal which one is the PreCog. Meanwhile, a peasant in a village chops wood while listening to an old man talk. This peasant is Theseus (Henry Cavill) who lives in this village with his mother and is trained in combat by this old dude (John Hurt). The village finds out that Hyperion is on his way towards their village, some guy defects to Hyperion’s side and gets his balls smashed for it, and Hyperion shows up in the town. Theseus lays a beating on a good portion of them by himself but gets captured and has to watch as Hyperion kills Theseus’ mother. Theseus is put with other prisoners like the four oracles and a thief named Stavros (Stephen Dorff). Together, they escape and make their way back to Theseus’ village, where Theseus finds the Epirus Bow and fights a Minotaur. Up on Olympus, Zeus (Luke Evans), Athena (Isabel Lucas), Poseidon (Kellan Lutz), Ares, and Apollo argue about whether they should intervene and stop Hyperion from releasing the Titans, but Zeus forbids it. Theseus has to do this himself.

I’m still trying to decide what I think about this movie, but don’t worry, I’ll work it out by the end of the review. I would say the story had potential but sometimes doesn’t make a lot of sense. The entire premise that this douche Hyperion wants to kill the Gods because their cell phones didn’t have call waiting and they didn’t hear his prayers is a bit over dramatic on his part. His motivation is often a mystery to me as he punishes the defector that wants to join his army by scarring his face and smashing his balls (not a joke. That shit went down) for being a coward, but also has Theseus’ mother killed in front of him because he has the gall to single-handedly attack part of his army. What’s your game, Hyperion? Theseus’ story is intended to be a pretty typical rags-to-riches story as the peasant guy becomes leader of an army against Hyperion. They talk about this for the entire movie and don’t give him anyone to lead other than Stephen Dorff until the last 10 minutes of the movie. And I don’t know if I could follow this guy anyway because the greatest weapon known to man is put into his hand and he cannot hold on to the damned thing. He finds it and is immediately attacked by a minotaur that causes him to drop it. Then he kills 4 random dudes with it and is later ambushed and gets the damned thing stolen for good. Good work, hero. The oracle lady didn’t work out very well either. She has a vision of Theseus holding the Epirus Bow, embracing Hyperion, and standing over a wrapped up dead body. Well the dead body is his mother, and burying her did lead him to the bow, but he obviously can’t hold on to the damned thing and never embraces Hyperion. I guess 1 for 3 is a good enough ratio to call someone a psychic. Maybe she’s just there to be hot and get them titties out, which she kind of does but the shadows keep you from seeing anything. It’s vaguely tasteful. I won’t give away the ending for you, but I felt like it was a bit of a let down.

The visuals and the fight scenes make this movie stand out. It’s very CGI heavy and most of the epic landscapes are generated in a computer, but done in a pretty awesome manner. The village Theseus comes from is carved into the side of a cliff, the city at the end is a huge wall built adjacent to Mount Tartarus, and even the monastery is huge in scale. Everything has a great look to it. If a negative could be said about the visuals is that everything is really dark. You can always see what’s going on, but the colors are all really toned down and overcast through the entire movie. The one bright spot in the movie is the little pool they come across as prisoners for about 5 minutes of the movie, but even that goes dark when it turns to night time. I also appreciated the pretty freaky interpretation of the Minotaur. It’s basically the same Minotaur you’d expect but wearing a helmet made out of barbed wire tipped with poison. There’s also a big metal bull that had started to get on my nerves as they showed it about four times and I kept waiting for it to pay off in some way, but then it did and I was finally relieved. But the pay off there didn’t do anything for me emotionally as it seemed to be intended to. The violence worked very well in this movie. They didn’t have nearly enough fight scenes, but the ones they had were pretty great. Most of them were Theseus whooping ass on a bunch of guys by himself, but there are also two that involve the Gods themselves and those ones are pretty epic and awesome. The final battle was the best as it goes from Theseus whooping a bunch of Hyperion’s troops, to the Gods fighting the Titans, mixed in with Theseus going mano-a-mano with Hyperion. The fight with Hyperion’s troops had something I thought was the best use of the spear I had ever seen. Theseus stabs a guy, snaps off the end, stabs the next guy with that, snaps the end off again, and then stabs another guy. I thought that was wicked awesome. The fights with the Gods are pretty cool because the thing they hit goes into slo-mo even though everything else is normal speed, and I found it a pleasure to watch. This contrasted nicely with Hyperion’s throwdown with Theseus as there was a dagger and a bunch of cool wrestling/MMA moves mixed in and showed how mortals could do it. I liked the battle that ended the movie though I didn’t understand it. It was Theseus fighting alongside the Gods with Titans up in the sky and viewed from underneath. I mainly liked this because it seemed to be a bit of a nod to the famous painting by Antonio Allegri da Correggio called the “Assumption of the Virgin”. Yeah, I’m educated.

The performances are pretty solid for the most part. Henry Cavill didn’t make much impact on me beyond his whooping ass scenes. Mickey Rourke was good, though. I’m happy to see that Rourke is having such a renaissance recently. He used to be famous back before I paid attention to actors, then disappeared for a really long time, and has fairly recently returned in movies like Sin City, the Wrestler, Iron Man 2, and now Immortals. Not that Immortals is that great of a movie, but you know he got nice and paid for it. He’s still in pretty good shape and plays his character very well, being a bit of a disgusting character that will smash anything that gets in his way. John Hurt was pretty charming as the old guy too. Everyone else pretty much just looked good and didn’t really strike me for their performances.

Even being a little biased by my love of Greek mythology, I don’t feel comfortable recommending you shell out $10 dollars for this movie. It looks good and has some nice fight scenes, and even a few decent performances, but the story left me either confused or wanting. When this movie is available for rental, I definitely think it’s worth your dollar or two to get it from RedBox or something because of it’s visuals and fights, but the story keeps me from saying it’s worth seeing in the theaters. I give Immortals “To those who much is given, much is lost” out of “Fight for immortality!”