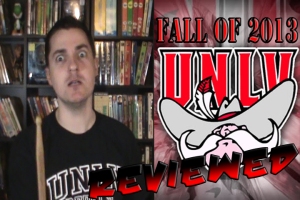 Two Hundred Thousand Dollars is a Lot of Money.  We’re Gonna Have to Earn It. 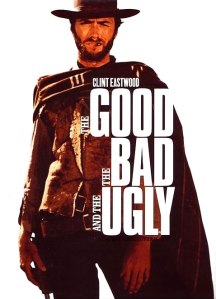 One of the classes I was most excited for as I returned to school was a class on film criticism.  Most of you would ask yourself what I could possibly stand to gain from such a class as I have already mastered the craft.  The answer is simple: a grade and a diploma.  But another thing I stand to gain from this class is the ability to review movies I might not have gotten around to on my own.  Today’s review is one such movie.  It’s a movie I’ve already seen, and even one that I already own, but it’s also one I’ve never gotten around to, and also one that probably would never occur to me to have reviewed.  And that’s how I’ve come to bring you my review of The Good, The Bad, and The Ugly, written by Age & Scarpelli and Luciano Vincenzoni, co-written and directed by Sergio Leone, and starring Clint Eastwood, Eli Wallach, Lee Van Cleef, Aldo Giuffre, Mario Brega, and Luigi Pistilli.

A man named Angel Eyes, heretofore referred to as Bad (Lee Van Cleef), interrogates a man over soup as to the whereabouts of a man named Bill Carson, who knows the location of a hidden cache of gold worth $200,000.  Elsewhere, a man called “Blondie” by some, but Good by me (Clint Eastwood), is running a scam with a criminal named Tuco Ramirez, or Ugly (Eli Wallach), where Good turns Ugly in for a ransom on his head, only to rescue him as he’s about to be hanged.  Good eventually decides that Ugly is no longer worth enough money to continue this ruse and abandons him in a desert.  Ugly eventually survives his predicament and returns to inflict the same on Good as punishment.  But while trying to watch Good die in the desert, Ugly comes across a wagon with none other than Bill Carson on board, badly injured.  Carson tells Ugly the cemetery where the gold is buried, but won’t tell him which grave until he’s given some water.  And while Ugly fetches the water, Good manages to get the name of the grave from Carson in Carson’s final words.  Now Good and Ugly must work together to find this hefty sum of gold, but Bad is looking for it too.

It should come as no surprise that this is a great film, and no surprise that someone that likes westerns as much as I do would really like this movie.  The story isn’t really its strong point though.  It’s fine, but it’s pretty simplistic.  It’s basically just a fetch quest for a couple bags of gold.  It was always about that, even before Good and Ugly found out about the big score that became the driving factor when they were running a scam to make money off of Ugly’s notoriety.  And that scheme didn’t really make sense to me either.  Obviously the word of this scheme has spread because the value on Ugly’s head goes up after they successfully con the town out of the reward money, but if word is spreading about that, how do people keep falling for it?  Shouldn’t they expect a scary-looking blond man to free Ugly at the last moment and ride off with him with the town’s money?  Also, none of the people truly live up to their titles that they’re given.  “Good” is not that good.  “Ugly” is far from the ugliest person I’ve seen.  And “Bad” is certainly not a pleasant person, but he’s got a sense of fair play.  He doesn’t really shoot anyone in their back or cheat or anything.  Good actually came closer to cheating, like at the end when he didn’t write a name on the rock that the winner of the gunfight would get to lead them to the treasure, but it seemed unnecessary anyway.  It would’ve been strange for Good to have been able to randomly guess that someone named Arch Stanton was buried at that very cemetery.  Knowing that there was no treasure buried at this grave, you would have to assume it would’ve been at least nearby.  The worst you could have done is have to dig up 4 graves with no treasure before you found the one that had the treasure.  Also, the big moment at the end where Good saved Ugly yet again was flattened for me.  Of course he was going to save him.  Why would he have left a corpse with $100,000 in gold?

The movie was expertly created.  Though some of the things slowed the pace of the movie, it was entirely calculated and effective.  You could easily say that the prolonged shots of people’s faces before a shootout were boring, but it succeeds at building such tension before what would turn out to be someone drawing their gun quickly and shooting a guy with one bullet.  If I were making this movie, I probably wouldn’t have spent so much time watching two guys eat soup just to build that much tension before one gets shot, but I also probably wouldn’t have made as good of a movie.  The music is also really helpful in building the tension.  Think of how silly a prolonged scene of a guy riding his horse past a donkey-powered water wheel would be without the music.  And that music is great.  I first heard some of the music from this movie on the front of the Metallica album, S&M.  If it’s good enough for Metallica, it’s good enough for me.

The cast in the movie were a little cliché, but the actor’s did a good job.  Western movies need those cliché characters, so I can’t really judge them.  I don’t think anyone has been better in a western than Clint Eastwood (Sorry, old people.  I’m just not a John Wayne fan.)  He would be undefeatable in a gunfight because there’s no way you could tell where he’s looking when he’s squinting that deeply.  And think of all the different ways that dude can strike a match.  He does it with his fingernail, on his pant leg, and even on his gravely, sun-beaten face.  Dude=man!  There were some things that bummed me out about him.  Most noticeably was the fact that he wasn’t particularly talented; he was just lucky.  In some movies he’s the baddest, or the fastest, or the most accurate, or even just the cleverest.  He was more clever than Ugly in this movie, but most of what saved his life was pure dumb luck, like when the soldiers stopped marching just in time for him to realize he was about to be ambushed by people outside his room, or when a random cannon blast knocked the ground out from under Ugly, allowing Clint to escape, or when another deus ex machina shows up in the form of a wagon to rescue him from Ugly yet again.  I want him to succeed with his own sheer awesome, not dumb luck.  Also, he should really quit smoking.  Not as much for the health benefits of it, but just because of how easy it makes him to track as Ugly can just follow his cigar butts like a bread crumb trail.  Wouldn’t happen if he switched to the e-cig.  He did have a few moments of great, wry wit, like when he read the letter addressed to “Idiots” and said that it was meant for Ugly, and I appreciated that.  I didn’t really like Eli Wallach at times.  He was a little over the top – which I generally don’t appreciate – but at least it’s what is called for by the character type.  Maybe it was just the time he had the noose around Clint’s neck and announced that he intended to shoot the legs off of the stool.  That’s great!  I hate it when people actually do things in movies.  I much prefer when they just talk about what they think they want to do.  I also didn’t like his lack of resolve.  If he would just shoot Clint on one of the many times he got the jump on him, he would’ve saved himself a lot of time.  Granted, he wouldn’t have found out about the $200,000 dollars in gold, but what he doesn’t know can’t hurt him.  Also, he benefited from the fact that he made his own luck, unlike Clint who was just beloved by the angels.  I also took issue with the old guy that ran the gun store that Ugly robbed.  How is a gun store owner in the old west so ill-prepared for the possibility of being robbed at the point of a gun he owns?

The Good, the Bad and the Ugly is a fantastic movie that still holds up as one of the greatest westerns of all time.  The story is nothing special.  Special is taken care of by great direction that takes full advantage of the music and the pace of the movie to build tension, and also by the actors that portray their clichés in very interesting way.  Also, it’s a Clint Eastwood western.  That’s the way to watch a western.  This is probably one of the more enjoyable movies I’ll be forced to watch in this class, but it at least makes me hopeful for the rest of the curriculum.  The Good, the Bad and the Ugly gets “In this world there’s two kinds of people, my friend: Those with loaded guns and those who dig” out of “You did a good job for me.”