You Always Told Me to Stay Off the Freeway 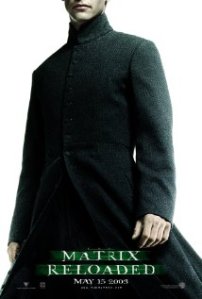 By now, I think most people have the feeling that the first Matrix movie was fantastic.  And, as with most fantastic things, the studio tried to capitalize on its popularity by cranking out a couple of sequels that sucked.  Going into today’s movie, I remember only that the series deflated me in the sequels, but I don’t really remember which one was the greater cause of it or why.  Because it was requested by Samrizon, because it continues the series, and because I can’t remember if I liked it or not, let’s check out my review of The Matrix Reloaded, written and directed by Andy and Larry (Lana) Wachowski, and starring Keanu Reeves, Carrie-Anne Moss, Laurence Fishburne, Hugo Weaving, Harry J. Lennix, Anthony Zerbe, Jada Pinkett Smith, Gloria Foster, Randall Duk Kim, Lambert Wilson, Helmut Bakaitis, Harold Perrineau Jr., Nona Gaye, Daniel Bernhardt, and Monica Bellucci.

Morpheus (Laurence Fishburne) has come across some information that a group of robotic Sentinels are tunneling towards the last remaining human city, Zion.  Commander Lock (Harry J. Lennix), commander of Zion’s military, orders all ships to return to Zion to defend it.  Morpheus asks another ship to wait around to get a message from the Oracle (Gloria Foster).  They do, and Morpheus takes his ship, the Nebuchadnezzar (which I only include because I like typing that word), back into the matrix so that Neo (Keanu Reeves) can contact her.  He does, but is immediately attacked by Agent Smith (Hugo Weaving), who was freed from the control of the matrix and is now trying to replicate himself into everyone in the matrix.  With the information received from the Oracle, Neo must battle his way through hordes of enemies, risk his life and the lives of his loved ones, and cost people their lives, all in order to get into a big room full of televisions and talk to a bearded jerk with a superiority complex.

By the time this movie came out, it suffered from the same problem that the first Matrix movie suffers from when watching it today: when it’s no longer innovative and impressive, it must rely too heavily on a story that’s not super impressive.  It’s fine enough, but it had the tendency to get a little talkie, which was a problem since about half of the dialogue was made terribly annoying by the fact that the Wachowski Brothers used the check from the first Matrix money to invest in a Thesaurus.  Especially the Architect.  The vernacular utilized by that gentleman was quite feasibly the most irksome and befuddling thing to attempt to cognize.  You had to virtually pick and choose the word you could fathom and try to formulate something comprehensible out of it.  Thank you, Thesaurus.  There was a little bit of love story in the first movie, but it was a lot heavier in this one, and I don’t really think it’s the Wachowski’s strong point.  For an example of this, I would harken back to the scene when Link was returning home to his wife Zee and was apparently about to enter the house and yell, “Where’s my pussy?!” until he realized that there were kids in the room.  Seriously, he walks in and gets out, “Where’s my puss…” before he sees them.  Is this how we’re supposed to do it, Ladies?  I’m going to get a girlfriend so I can introduce her as “the irrelevant skin and tissue that connects the boobs and the vag.”  They’re much better when it comes to scenes like the dialogue between Morpheus and Commander Lock.  That dialogue was thick with “Fuck you, I’m smarter than you” from Morpheus.  The Wachowski’s also begin to show themselves to be a little pervy, like the part where the Merovingian has randomly put the programming equivalent of Spanish Fly into a girl’s cake so that the Wachowski’s can vaguely mask their desire to zoom in on a computer code version of a lady’s vagina with some nonsense dialogue about causality.  But then perversion and the Merovingian came together for a good line that Persephone dropped about the lipstick that wasn’t on his face.  It’s so hard to tell where to stand with these Wachowski’s.

The action was sublime in this movie.  If they were going to teach a class about action sequences, they would show the freeway battle scene.  It’s spectacle at its best, and mostly done practically if I remember correctly.  There was some CG, but mostly it was just cars getting fucked up.  The movie also jumps right into some decent action, although it turns out to be a bit of a fuck you because it’s a dream sequence.  It also adds to my idea that people suck at shooting in the matrix.  Trinity’s falling out of a window and an Agent is falling right after her.  She’s unloading uzi’s at him and he probably can’t dodge very much in midair, but neither one of them can hit anything.  A single bullet out of the entire barrage connects.  They also had some pretty good hand to hand combat scenes, like Neo and the Merovingian’s henchmen.  The movie still looks pretty amazing, but it has a couple of faults with some of the CG.  I remember there being some pretty awful face replacement and fakey looking computer generated people, mostly surrounding the multiple Agent Smiths in the big fight on the playground.  There’s also an icky, sweaty-looking dance/Neo and Trinity fucking sequence that goes on a little long, but at least everyone in the dance sequence has their nipples out.  I also want to believe that the one guy that jumps really high out of the crowd was just doing that so he could be on camera.  I also liked the idea, and the execution, of the Keymaker’s skillset, turning a broom closet into a mansion foyer.  And the best thing about the look of the movie was that epic urinal in the Merovingian’s restaurant.  It was a waterfall!  I’d pee all over that!

The performances were roughly unchanged from the previous movie.  I think I might’ve liked Keanu Reeves a little less in this movie.  He still seems like a mixture of Ted from Bill & Ted and Johnny Utah from Point Break.  But this time around, he’s the savior of the world from the first moment.  He wasn’t all cocky about it, but you’d like to think the world was not in his hands.  Carrie-Anne Moss still looks lezzie and Laurence Fishburne is still spooky, but he pulls out a lot more rousing speeches this time around.  We’re also introduced to Jada Pinkett Smith’s Niobe character, which made little to no impact on me.  I found myself slightly irritated with Hugo Weaving in this movie, but it was more the fault of the writing that he kept saying stupid things when talking with his clones.  And thank the good lord up above for the inclusion of Monica Bellucci.  She didn’t do very much in the movie, but Gundamn is she good looking.  I like to think that Keanu slipped a chunk of change to the Wachowski’s to add a random scene where she wanted him to kiss her for no good reason, just so he could stop kissing the lezzie for a while.  And it was fun for me that they added Daniel Bernhardt to the movie as one of the Agents.  I think we all remember his debut performance in Future War (MST3k movie.  Check it out).

Not nearly as impressive and innovative as its predecessor, but still an enjoyable watch in its own right.  The Matrix Reloaded can spend a little too much time talking for my taste, but the action that the dialogue is filling the space between is worth the wait, especially in the freeway scene.  I definitely think Reloaded does a passable job of holding a candle for The Matrix, even though it has a cliffhanger on a movie that’s kept separate from its resolution by almost a year.  But I won’t have to wait that long because I’m reviewing it tomorrow.  For now, The Matrix Reloaded gets “This is Zion, and we are not afraid!” out of “I just love you too damn much.”