We All Start With Innocence, but the World Leads Us to Guilt. 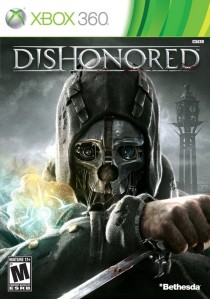 The true inspiration for today’s review was that terrible holiday known as Black Friday. Technically, it started a while before that with a number of people telling me how awesome this game was. But that didn’t actually inspire me to buy the game because it still didn’t look that interesting to me, and them talking it up was only going to make it worse. But there was something that could make it better. It could go on sale for $25 on Black Friday. And it did! Now, I hate Black Friday, and if it was my choice I wouldn’t have been there at all, or this game would have to wait for me until about 1 pm because there’s no way in Hell I’d get up early for it. Since I was forced to be there, and I was in the vicinity buying a game I wanted much more than this, I decided to relent and pick up a copy of Dishonored, developed by Arkane Studios, published by Bethesda Softworks, and including the voices of Chloë Moretz, John Slattery, Billy Lush, Susan Sarandon, Lena Headey, Brad Dourif, and Carrie Fisher.

We are the bodyguard of the Empress of Steampunk world. Our name is Corvo Attano and our voice box was apparently damaged at a young age, rendering us completely speechless. This becomes problematic when the Empress is murdered in front of us (because we’re also very bad at our job) and her daughter Emily (Chloë Moretz) is kidnapped (because we’re EXTRA bad at our job), and we are unable to tell people that we didn’t do it. We get all nice and framed for this, but we get freed by a group of Loyalists, led by Admiral Havelock (John Slattery). Then we are set on a mission to shake up the corrupt government and free Emily, the rightful heir to the throne.

You people need to knock it off with the whole overenthusiasm thing. You talk up a game that is “Okay” at best until it is made out to be the game of the year and the game can only suffer for it. I think the problems I had with the story made for the bulk of my problems with it. Actually, it was more how the gameplay changed the story, but we’ll get to that after a few other points. The first thing that struck me is that the story is kind of bland and mostly about political conspiracies, and anyone that knows me knows that there’s not a whole lot I find more boring than politics. The idea of the silent protagonist feels a little antiquated now as well, and it seems like it would have at least helped with some of the problems my character got into because of it. They say that the purpose of the silent protagonist is to get the player more involved with their character, but that hasn’t really proven to be the case, has it? I didn’t give two flying fucks about Corvo. I didn’t feel like I was him, nor did I get particularly involved in his story. If you really want to get me involved in a game, you need to make one about a guy playing video games, masturbating, and occasionally writing reviews that one or two people read. Then again, I wouldn’t buy that game either, and anyone else that did might get too depressed by it. And the other side of that argument is that there are plenty of games that have protagonists that speak that I got involved with. Ezio Auditore talks, Marcus Fenix talks, Nathan Drake talks. When my roommate asked me what my 5 favorite games would be, 4 out of 5 of them had protagonists that speak. The only one with a silent protagonist in that list was Final Fantasy 7. How about you have a great story to get me involved instead? There were also tons of things in the game that annoyed me because they didn’t make sense. When I was walking the streets on my way to a masquerade ball, why would guards attack me when I was wearing a mask? If that mask is good enough for the guards at the party, the other ones would surely have known about it or I’m sure half of the guest list was killed on their way to the soirée. And why did the guards keep trying to kill me after I exposed the Lord Regent and they took him to jail? Shouldn’t they all have figured at that point that I was framed?

I need to talk about the gameplay before I can combine it with the story to tell you what really annoyed me about the game. The gameplay itself was fine, but it’s really nothing I haven’t seen before. It feels like it wants to be, but it isn’t. And it ends up being a little boring to me, as most stealth games are. You have to do a really good job on your game to make stealth games feel like more than just waiting in shadows for someone to turn their back. They added in some powers, like the Blink ability, that makes it interesting when you can teleport behind someone to stab them up good. But if sneaking didn’t work out for you, there didn’t seem to be much by way of consequences for it. Fighting was fairly easy at first, being not much more than block and stab. Later it gets a little more complicated because the enemies dodge more and have guns, but fuck them ‘cause I can stop time now. The upgrades to your equipment never seemed to help that much, but the upgrades to your powers maybe helped too much, making the game a little too easy when you could see your enemies through walls, teleport right behind them, freeze time if you were in a pinch, and call in an army of rats if that wasn’t working. Also, the AI wasn’t that bright, which adds to the easiness. There was one part where I was flat out spotted by a number of guards and I backed up, falling down about 10 feet off a ledge where I could hear the guards say, “I guess it was nothing.” Out of sight, out of mind, I guess. The biggest problem with the gameplay I had was that I couldn’t play it for more than an hour at a time without getting so bored I had to turn it off. I’m sure the game wouldn’t take that as a compliment, and it wasn’t intended as one.

The biggest problem I had with the game was how the gameplay affected the story. They let you know about halfway through the game that killing people turns the story dark at the end. Fuck that shit! Killing these enemies just makes sense. A: it’s mostly self-defense because if any of them see you, they will try to kill you. B: it makes the game easier because you don’t have to keep watching out for them after they’re dead. C: it’s more fun! All I heard about this game before I bought it was that it was basically about cutting throats. That is literally all I knew about it before I played it. Then you’re going to punish me by making me corrupt an innocent little girl and make everyone hate me and be shitty to me because I played the game the way that makes sense? Fuck you! The Spiderman game I’m playing now doesn’t punish me for webbing people and punching them in the face. Assassin’s Creed doesn’t wag its finger at you for stabbing the people that deserve it with your wrist blades. I understand punishing me for killing innocents, but I wasn’t doing that. At the end of the game, the formerly nice boat driver that took me to my missions was so shitty to me he pretty much said he hopes I get killed, and just to help that along he’s going to fire his gun to get the attention of everyone on the island before he departed. And Emily is drawing pictures of me standing atop a mountain of corpses with a sword dripping with blood as she talks about how she’ll kill anyone that opposes her when she becomes Empress.

I don’t have very much to say about the look of the game. It looks good. I had no complaints. It’s just a Bioshock-esque steampunk world, but it’s so bland and dark to set the mood that it ends up being visually disinteresting and adding to the boredom I already had for the game.

This is also not a great game for achievements. I’m leaving the game with just over 300. Most of the achievements are for completing missions without killing anyone and without getting spotted. I find that course of action too frustrating and boring to actually make an attempt at it. I probably would if I found the game more interesting, but I just don’t care. I was vaguely interested in finding out what would happen to the ending if I had played this game the shitty way, but that question could be answered by a quick trip to YouTube. It wasn’t worth it.

Dishonored suffered from the high expectations set by the people I know. Seems to be a running theme in some of my reviews, doesn’t it? This game was okay, but certainly not as spectacular as some people acted like it was. The story was pretty good if you’re into that kind of thing, and the gameplay is fine but in no way innovative. But I’ll tell you what no one told me: this game is, in fact, not at all about stabbing people and slicing throats. Go into the game with that idea and the game will hate-fuck your skull. Instead, play this game if you like falling asleep while waiting in the shadows to hug someone that’s trying to kill you until they fall asleep and you can move on. That’s how the game wants you to play it. Also, I guess the other option is to just not play it. I’d recommend that one. Especially with it still at $60. I paid $25 for it and I didn’t think it was worth it. But I am going to trade it in for $15 dollars, so I recommend buying it when you can find it for $10. Dishonored gets “It can take one to sublime heights or harrowing depths” out of “Are you chasing something, or running away?”

Let’s get these reviews more attention, people. Post reviews on your webpages, tell your friends, do some of them crazy Pinterest nonsense. Whatever you can do to help my reviews get more attention would be greatly appreciated. You can also add me on FaceBook and Twitter. Don’t forget to leave me some comments. Your opinions and constructive criticisms are always appreciated.