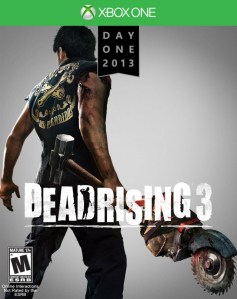 I’ve played all of the games in today’s series before but have never been nearly as into them as everyone else seemed to be.  And no, I’m not talking about the Grand Theft Auto series.  I think I’ve already written that review.  Though I’ve never been a fan of this series, I found myself extremely excited to purchase this game on day one.  Why is that?  Because it was one of two games I intended to buy for my brand new Xbone!  And it was the only game I was going to buy that was exclusively on said Xbone.  We shall see how that worked out for me as I review Dead Rising 3, developed by Capcom Vancouver, published by Microsoft Studios, and including the voices of Andrew Lawrence, Shelby Young, Valorie Hubbard, Daniel Roebuck, Kirk Bovill, Juan Gabriel Pareja, and Veronica Milagros.

Ten years after Dead Rising 2 and Capcom is satisfied with using the same story again with different characters.  Mechanic Nick Ramos (Andrew Lawrence) is in Los Perdidos, California, trying to survive a zombie outbreak with a few other survivors named Dick (Kirk Bovill), Rhonda (Valorie Hubbard), and Annie (Shelby Young).  But their survival has a timer on it as they find that the government has decided to write the city off … with a nuclear bomb.  The group decides they need to use this time to repair an airplane they found and get out before the bomb is dropped.

When looking at the very few release titles for the Xbone, the two games I was most interested in were Dead Rising 3 and Ryse: Son of Rome.  Ryse was said to be the game that best showed the power of the system, but it fell off my radar because it was said to be too repetitive.  Dead Rising was supposed to be not leaps and bounds above current generation games in visuals, but was supposed to be fun.  And it was, but story certainly had nothing to do with that.  It’s a very basic story, one I feel like I’ve already lived at least twice in the Dead Rising series.  There’s a zombie outbreak and you have about 6 days to escape.  They have a couple other things going on like a few relationship things and a government conspiracy, but nothing that was shocking.  I guess I found it shocking that one of the characters in the game throws up when a guy’s intestines are thrown against a window, but only because of the failing logic involved in a guy being squeamish about gore when he spends his days surrounded by the walking dead.

Visually, the game does not stun as I had hoped it would as my guide into the new generation of video games, but I suppose you can find the power of the Xbone if you really look for it.  The amount of zombies on screen at any given time is what shows off the processing power of the machine, and all of these zombies look at least a little bit different.  But the fact that it seemed to be a more stylized look instead of trying to look uber-realistic hindered me from being impressed by it at first glance.

The real reason to buy this game is because of the gameplay.  It’s a lot of fun.  It’s pretty mindless fun as you may have come to expect from a hack-and-slash game, but it is fun nonetheless.  I think I had the most fun with the crafting system.  It’s really pretty deep.  You can make a ton of stuff in this game by collecting and combining even more random items, but I found myself just picking the few items I particularly liked and sticking with that.  I really liked how effective the electrical hammer was.  And, though it wasn’t nearly as effective, I felt obligated to carry around a lightsaber at all times.  How could I not?!  And there were tons of collectibles and random events to encounter around the map, but I found myself resenting the time constraints of the game.  I understand how the 6 day thing relates to the story, but I want to play around in the world and collect stuff.  Why would you want me finishing your game so quickly anyway?  It should be considered an insult to say you can beat a game in 10 hours.  Most games add things like collectibles in hopes that you’ll spend more time playing and getting the feeling that you got your money’s worth out of the game instead of trying to force you to rush though the game.  I also didn’t enjoy the multiplayer aspects.  I was running around in the game and some random dude decided to jump into my game without my consent because I hadn’t gone into the settings and disabled that.  I don’t want someone up in my Kool-Aid like that!  Especially not if him joining would stop my game in its tracks for a minute while I wait for them to join!  So I quickly turned that off and went by to my self-imposed isolation.  Just the way I like it.  I also wasn’t a fan of the way Xbone seemed to try to rip off Sixaxis from Sony.  When a zombie grabs you, you can shake your controller to get them off.  And it works as well as Sixaxis ever did … which is to say not very well.  I hope it doesn’t become a thing with the Xbone, but it’s still a minor gripe.

I only got about half of the achievements in this game before I stopped playing it in favor of Assassin’s Creed IV.  I may go back and clean up a few more that I was close to.  They’re mainly just a lot of collecting, leveling, and killing.  Killing 100,004 zombies takes a while.  Everything else seems attainable, depending on how hard Nightmare mode is.

Dead Rising 3 is the best (and only) Xbone exclusive I’ve played.  Unimpressive story and graphics that only impress with the amount of zombies the system can have on screen at any given time are overridden by the good old fashioned fun of cutting your way through an ocean of zombies with a weapon you made from a sledgehammer and microwave.  If you purchased an Xbone, this is probably a game you should have for it.  Dead Rising 3 gets “Local Hero” out of “Them’s the Facts.”