I Had No Dream! 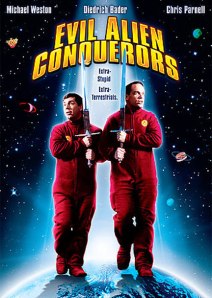 Another request of a movie I had never heard of, but this time it came from my friend Gristle.  With no clue what I was getting myself into, I first went to Netflix and was happy to find this movie available for Netflix streaming, keeping me from having to get out of my chair to find it.  And when I started watching it, I found myself even more delighted to find out this movie stars a great many people that I find hilarious, but who have not necessarily made it in the mainstream.  I was excited to see what the combination of a large number of funny people might bring me.  What they brought me was Evil Alien Conquerors, written and directed by Chris Matheson, and starring Diedrich Bader, Chris Parnell, Mike McShane, Tyler Labine, Michael Weston, Tori Spelling, Nicole Robinson, Elden Henson, Beth Grant, Phil LaMarr, and Martin Spanjers.

It may surprise you to find out that this movie is about two aliens who are evil and are attempting to conquer Earth.  These two aliens, My-ik (Diedrich Bader) and Du-ug (Chris Parnell), are sent to Earth by their leader, the mighty Rabirr (Mike McShane), and his emissary Vel-Dan (Phil LaMarr) and ordered to behead all of the Earthlings in two days, in preparation for the coming of the 100 foot tall Croker (Tyler Labine).  They are the second group to be sent to Earth, since the first group disappeared after a teleporter failure.  But that has been fixed … mostly … probably.  They’re sent to Earth, but their powerful swords are accidentally turned into swords the size of toothpicks by the teleporter.  This does not matter, because they are so much more powerful than the weak Earthlings.  They quickly meet Kenny (Michael Weston), who takes them in and offers them shelter and help in taking over the world.  But the two aliens quickly find that they are pretty ineffectual when it comes to conquering planets.  Can they accomplish their mission in time, or will they too face the wrath of the mighty Croker?

This movie takes a potentially funny premise and some usually funny actors and make a fairly lackluster film.  It’s a comedy, but it seems to just take a fairly thin premise and stretch it very thin, without actually doing that much funny stuff in between.  I’m sure we’ve all seen a film or two about aliens coming to Earth, and the hilarious contrast between the two cultures.  The aliens in this movie introduce themselves as evil alien conquerors and quickly decide what manner of death that person will meet.  They also quickly become infatuated with Smirnoff Ice, Sun Chips, and the band Supertramp.  Take these jokes, rince and repeat, and keep doing so for about 50 minutes.  When at that point you decide the audience is bored, reintroduce the giant Croker, but have him be shrunk down to regular human size, but have him refuse to admit that he’s now smaller.  That will fill the rest of the movie.  They try to get a lot of mileage out of absurdity and quirkiness, but none of it ever reached a point that made me laugh.  I didn’t hate watching it, I just didn’t laugh.

I like the greater majority of the actors in this movie, but I feel like they just didn’t have that much to work with.  Either that, or most of them were just let off the leash and needed to be corralled into funniness a little better.  I’m a huge Diedrich Bader fan.  He’s made a misstep or two (Meet the Spartans), but I generally at least like him in everything I see him in.  Office Space, Jay and Silent Bob Stirke Back, even the Beverly Hillbillies movie.  In this movie, he didn’t do much for me.  Chris Parnell suffers from the same perception from me as does Bader: I’m just not convinced that they should be leads in a movie.  Both are awesome as background comic relief.  Remember Parnell in Anchorman?  Hilarious!  I first fell in love with Tyler Labine when I saw him in Zack and Miri Make a Porno as the drunk guy that walks into the middle of a porno shoot.  I liked that whole movie, but that one small part sticks in my mind as the funniest part.  In this movie, however, he was just way over the top as Croker, which can work sometimes, but in this instance just worked on my nerves.  Sadly, the same stuff can be said about most of the cast.  I thought they were hilarious in other things.  What happened here?

I don’t mean to beat up on this movie too much.  It’s not a horrible movie by any stretch of the imagination, but it did not connect with my sense of humor at all.  I thought it was quirky, but a little boring and they stretched the premise way too thin.  It’s available on Netflix streaming, so you can give it a shot yourself if you like.  My friend Jesse generally has a good sense of humor, and I assume he liked this movie if he recommended it to me, so maybe it will connect with you better than it did with me.  A lot of people liked Napoleon Dynamite, after all, but I despise that movie.  Give it a go sometime, see if you like it.  But, for me, Evil Alien Conquerors gets “You will die painlessly!” out of “They are imbued with Kabijjian magnificence!”